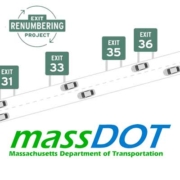 While you have likely read about this initiative in the general media, We wanted to provide a link to MassDOT’s Exit Numbering Project website detailing its efforts to renumber the various federal highway exits.

In particular, MassDOT is converting all exit numbers on freeways to a milepost-based numbering system, per Federal Highway Administration (FHWA) requirement.

The Federal Highway Administration’s 2009 Manual on Uniform Traffic Control Devices mandated that all states establish a mile-based exit numbering system. The conversion to a mile-based exit numbering system will be implemented on a route-by-route basis, starting in Western Massachusetts and moving eastward, and is scheduled to be completed in spring 2021.

For individual routes, exit numbering conversion will take place east to west or north to south. During a transition period for motorists, “Old Exit” signs will be installed at each converted exit for a minimum of two years.

As reported, MassDOT has committed to the implementation of mile-based with construction scheduled to begin late in the Summer of 2020.

MassDOT Congestion in the Commonwealth study
Scroll to top