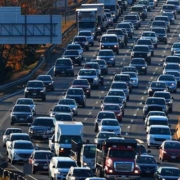 In the summer of 2018, Governor Baker signed HB4833, which included language that directed MassDOT to conduct a study of vehicular congestion on Massachusetts roadways. Specifically, the mandate calls for MassDOT to “design and execute a study that provides a detailed analysis of practical pathways by which the Commonwealth could reduce motor vehicle congestion and make appropriate recommendations for further study or pilot programs, if warranted.” This report was released on August 8, 2019.

The analysis takes a layered and mixed-methods approach to identify and investigate where, when, and why congestion occurs in Massachusetts. This study relies on several different sources of information to be as thorough as possible and to reflect all of the different ways to understand and describe congestion and its sources.

To some extent the data and analysis presented in this report confirm what Massachusetts drivers already know: that congestion exists in pockets all across the Commonwealth, but is generally worst on the roadways in and around Greater Boston. As presented in Chapter 4 of this report, the report’s key findings are: