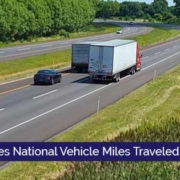 From the American Transportation Research Institute.

The American Transportation Research Institute today released a new report detailing the costs of deploying and operating a national vehicle miles traveled (VMT) tax. This study was identified as a top research priority by ATRI’s Research Advisory Committee in 2020.

With a goal of understanding the opportunities and challenges of a federal system, the research first explored the technical and administrative requirements of charging every U.S. driver for miles driven. Next the costs of operating a VMT tax program were calculated, including those associated with technology, data communications and account management.

It was found that replacing the federal fuel tax with a VMT tax that is assessed on 272 million private vehicles could result in collection costs of more than $20 billion annually – or 300 times higher than the federal fuel tax. The central reason for this large increase in costs is the shift in collection points – from a couple hundred fuel terminal operators to every registered motor vehicle in the U.S.

“It’s clear that a VMT tax is a far more complicated and costly replacement for the fuel tax than many had anticipated,” said James Burg Trucking Company President and CEO Jim Burg. “If a system like this is going to work for everyone, many years of thoughtful planning and federal leadership are needed.”

Additionally, the report found that hardware costs alone would have an initial price tag of $13.6 billion and require ongoing replacement, telecommunications costs would be approximately $13 billion annually, and account administration would be an additional $4.3 billion each year. On top of these costs, credit card transactions for electronic payment and even the shipping costs for the hardware could each cost more than $1 billion.

“With policymakers preparing to lay out a vision for the future of America’s infrastructure, ATRI’s analysis could not come at a more critical time,” said ATA President and CEO Chris Spear. “Most experts agree that some sort of VMT system is a part of that future, and ATRI’s report makes clear that implementing it will take thoughtful leadership, cooperation from stakeholders and a strong plan to transition away from current funding streams.”