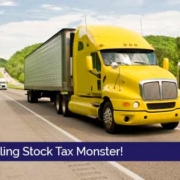 The Massachusetts Department of Revenue (DOR) secured a change in the tax law in the mid-1990s and is only now enforcing it. The change? The ability to tax rolling stock if a company has a “substantial nexus” to the state!

While 37 states exempt the sales and use tax on rolling stock, Massachusetts now applies this tax to newly purchased trucks because of this law and a company’s “substantial nexus” to the state.

Under Massachusetts law, a “substantial nexus” or “tax jurisdiction” can be established when a company:

If the DOR reviews your company, it can seek tax on any rolling stock you’ve purchased for the past three to six years.

For example, consider the following: Your company has a terminal, customer service center or headquarters in Massachusetts. You’ve purchased six tractors every year in New Hampshire for five years. Sales tax, if the vehicles were purchased in Massachusetts, might be approximately $8,500 each (i.e. $135,000 x 6.25%). Each year, you send the six trucks to your Massachusetts terminal to be upfitted according to your company’s standards, but they are otherwise used outside of the state. The DOR, because of your substantial nexus to the state and the vehicles’ entry into the state, could try to collect over $250,000 plus penalties for six years’ worth of unpaid taxes. (5 years x $51,000 in taxes owed (i.e. 6 tractors x $8,500)). In reality, certain trucking companies have already been assessed back taxes and penalties exceeding millions of dollars and penalties under similar scenarios.

TAM is currently working with elected officials to remove this rolling stock tax from law. Last legislative session, the Massachusetts House of Representatives passed this exemption.

A study by the Dukakis Center at Northeastern University showed that eliminating the rolling stock tax in Massachusetts will provide for future growth of the trucking industry, improve public safety and produce public safety benefits.

TAM has been working with other organizations, including statewide business, environmental, and public safety groups to reverse this law.

Removing the rolling stock tax from Massachusetts law is just one of many initiatives that TAM works on for the Massachusetts trucking industry.