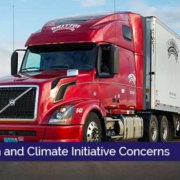 TAM is committed to improving air quality in Massachusetts and supporting policies that safeguard the environment. And while we appreciate and applaud the efforts of the Baker administration to pursue these goals via the TCI-P, we have multiple questions and concerns about how the program will affect Mass trucking companies, particularly users of diesel fuel, when officially enacted.

TCI-P will inherently change behavior in the commercial transportation sector, but potentially not as it was intended. Diesel fuel in particular will continue to be utilized in Massachusetts, but it will simply be purchased elsewhere whenever possible.  Most troubling is that it will likely not significantly reduce emissions already being reduced from increasingly stricter diesel fuel regulations, and will actually drive businesses and jobs away from our state.

We understand that TCI-P is designed to reduce the amount of fossil fuel utilized for transportation in Massachusetts. But it is problematic that the commercial transportation sector is not considered separately. Diesel fuel and gasoline fees (taxes) should not be looked at equally; they are very different.

Unfortunately, in our opinion, the limited amount of participation across the region is problematic on many fronts as well, and seems to call into question the viability of the initiative at this point. Listed below is a sampling of some of the concerns we have with TCI-P, and we would welcome the opportunity to discuss these issues to obtain clarity and understand how these concerns are being addressed.

All figures are per US EPA

As of January 2021, a typical five-axle tractor-semitrailer combination paid:

TAM is anxious to get a better understanding of TCI-P’s plans to address these issues as well as many others. We stand at the ready to discuss all issues and to offer our expertise to further detail any and all of the issues we have raised.