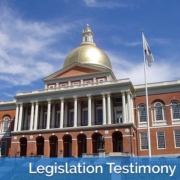 Dear Chairmen and Members of the Committee:

On behalf of the over 250 trucking company members of the Trucking Association of Massachusetts (“TAM”), I am writing in strong opposition to House Bill 3027, An Act Relative to Route 60 in the Towns of Arlington and Medford; Senate Bill 2148, Relative to the Use of the Neponset Valley Parkway in the Town of Milton; and House Bill 3670, An Act Relative to Municipal Truck Routes. TAM respectfully requests that these bills be held in committee due to existing federal and state regulations already governing the transportation of hazardous materials, specifically, and the effect on neighboring municipalities, generally.

Under the applicable provisions of the Surface Transportation Assistance Act (“STAA”), local governments are prohibited from denying reasonable access to trucks. 49 U.S.C. § 31114. Further, under the STAA, trucks transporting household goods must have access to points of loads and unloading. 49 U.S.C. 31114(a)(2) and 23 C.F.R. 6 658.19(a). A municipality, if legally trying to create citywide or even specific route exclusions, cannot unilaterally declare that limited truck routes exist within its confines. 23 C.F.R. § 658.11(d)(1). A local municipality must petition the Governor of the Commonwealth, through his representative, the Massachusetts Department of Transportation (“MassDOT”), for truck route and time exclusions. Id. The state’s request is then forwarded to the Federal Highway Administration (“FHWA”) – this approval by FHWA constitutes the final decision of the United States Department of Transportation. 23 C.F.R. § 658.11.

Further, the federal government has taken a lead role in coordinating the regulation of transporting hazardous materials through the Nation, generally, and states, specifically. 49 U.S.C §5101 (“purpose of this chapter is to provide adequate protection against the risks to life and property inherent in the transportation of hazardous material in commerce by improving the regulatory and enforcement authority of the Secretary of Transportation”). To preserve this authority, Congress included language providing a federal preemption of any state, local or territory hazardous materials route established after 1994 that did not follow an appropriate review and study process. 49 USC §5125. Accordingly, federal law provides such a mechanism; namely, allowing a State or Indian tribe to establish, maintain, or enforce a highway routing designation over which hazardous material may or may not be transported by motor vehicles, or a limitation or requirement related to highway routing, only if the designation, limitation, or requirement complies with 49 U.S.C. 5112(b). 49 U.S.C. 5125(c)(1) (emphasis added).

The standards required by 49 U.S.C. 5112(b) for establishing highway routing requirements for non-radioactive hazardous materials (“NRHM”) are set forth in 49 CFR part 397, subpart C, and apply to any designations established or modified on or after November 14, 1994. 49 CFR 397.69(a). A State, a political subdivision or Indian tribe must follow these standards, promulgated by the Federal Motor Carrier Safety Administration (“FMCSA”), when establishing highway routing requirements for hazardous materials. The procedures and standards include, but are not limited to: notice to the public for comment (49 CFR §371.71(b)(2)); ensuring through routing between adjacent areas (49 CFR §371.71(b)(4)); allowing reasonable access to points of loading and unloading (49 CFR §371.71(b)(7)); a requirement for the state designated “routing agency” to ensure compliance with federal regulations, if a political subdivision seeks to create a NRHM route (49 CFR §371.71(b)(8)); conducting a complete analysis and review, including but not limited to effects on affected persons and localities, among other factors. (49 CFR §371.71(b)(9)). The Commonwealth of Massachusetts is considered a “State” for purposes of hazardous materials transportation law. 49 U.S.C. 5102(11)(a). The designated “routing agency” of the Commonwealth is the Massachusetts Department of Transportation. 49 CFR §397.65.

In similar cases, routing designations in a major metropolitan city were preempted because the city failed to comply with routing standards under 49 CFR Part 397. 71 Fed. Reg. 18137 (April 10, 2006) (finding that the local government of Washington, DC never conducted a routing designation analysis nor followed the appropriate and governing federal procedure for determining such route). FMCSA’s regulations require compliance with the highway routing standards in 49 CFR §397.71 when a state establishes or modifies a highway routing designation and maintains or enforces such designation. Id. at 18141 (emphasis added). Likewise, a City ordinance limiting trucks carrying hazardous materials to one street was found to be preempted when the city failed to comply with routing standards in 49 CFR Part 397. 66 Fed. Reg. 37260 (July 17, 2001)(finding a Morrisville, PA routing requirement for transportation of ‘dangerous waste’ was preempted).

As written, these three bills seek to eliminate MassDOT’s ability to oversee highway routing and conduct the analysis required under federal law and regulations to institute a non-hazardous material and a hazardous material truck route and, in effect, a truck ban on other roads. As an extensive federal process is already in place, it is unlikely that either of these bills would survive a federal preemption challenge. That said, it also remains unclear whether the regulation of interstate and intrastate hazardous material transportation inappropriately might infringe on the commerce clause of the United States Constitution due to the outright prohibition of through traffic on the roads contemplated in these bills.

On a state level, it is already well established that no municipality may regulate the use of motor vehicles on public ways without the approval of the MassDOT. Mass. Gen. Laws ch. 90, § 18; See also Mass. Gen. Laws ch. 90, §19 (providing for regulation of trucks and trailers under the authority of MassDOT for purposes of creating truck exclusions). Of note, a local municipality’s regulations banning certain types of traffic in opposition to state law is invalid. American Motorcyclist Ass’n v. Park Comm. of City of Brockton, 412 Mass. 753 (1992)(finding local ordinance banning certain class of motor vehicles inconsistent with the Mass. Gen. Laws ch. 90, §18 which provides a comprehensive regulatory scheme.). While municipalities are given broad powers under Article 89 of the Massachusetts Constitution, this power is not so expansive as to permit local ordinances that regulate areas outside a municipality’s limits. Id. at 442. It is hard to imagine that banning access to a municipality or neighboring municipalities for purposes of deliveries is in line with existing Commonwealth policies that support cogent transportation planning.

TAM urges the Committee to closely examine any effect that routing restrictions or truck exclusions have on the seamless transport of goods from one location to another in the most efficient and safest manner. The TAM firmly supports the existing federal and state laws already in place. Truck route restrictions in one municipality often have a dramatic effect on vehicular traffic – truck or otherwise – in neighboring municipalities. Put simply, one municipality’s routing restriction not only dictates what may occur within its geographic boundaries, but what must occur outside of its boundaries. Accordingly, such routing decisions require more thorough study in accordance with federal law and regulations than that which is proposed in the legislation before the Committee – notwithstanding the numerous federal preemption and constitutional issues it raises.

I appreciate your attention to this important matter and respectfully ask that HB3027, HB3670 and SB2148 be held in committee for further study. If you have any questions or concerns, please do not hesitate to contact me.