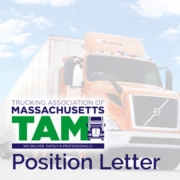 On Sept. 10, Anne Lynch, the executive director of the Trucking Association of Massachusetts, wrote to oppose the Massachusetts Department of Transportation’s South Boston Truck Bypass Road Pilot Proposal that will open the so-called “haul road” to non-commercial traffic. The letter is provided below, and a PDF is available for download.

On behalf of the Trucking Association of Massachusetts (“TAM”), I am writing to oppose the Massachusetts Department of Transportation’s (“MassDOT’s”) South Boston Truck Bypass Road Pilot Proposal that will open the so-called “haul road” to non-commercial traffic.  This initiative will likely lead to more congestion, increase the potential for air pollution, and decrease public safety.

The importance of providing congestion-free connectivity for trucking between major points of import/export terminals and the interstate highway system cannot be overstated.  The South Boston Truck Bypass Road links the Conley Marine Terminal with access to interstate highways that ensure trucking stays off the smaller, local roads of South Boston.  The current configuration reduces congestion and pollution (i.e. no idle times as a result of congestion) and increases public safety (i.e. limits access to professional drivers only). Under the proposed “pilot program”, MassDOT proposes opening this roadway for use by all non-commercial traffic as well as, potentially, the biking community.  Unfortunately, this will ultimately defeat the reason for which the bypass road was created in the first place.

With the introduction of the proposed pilot program, the Commonwealth will likely increase congestion while working against the emissions and safety goals it has worked with industry to achieve.  By allowing non-commercial traffic unto the South Boston Bypass Road, there is a greater likelihood of increasing congestion which, although the trucking industry has greatly reduced its own carbon footprint, will increase the potential for increased air pollution in the South Boston neighborhood.  Further, as identified by numerous elected officials from the City of Boston, introducing non-commercial traffic on to the South Boston Bypass Route presents significant public safety concerns.  The various clearances, sight lines and turning radius for trucks leads will be compromised by this pilot program.

As a final note, there was discussion at a recent public meeting relative to this matter about the potential for not only allowing bicyclists to use the South Boston Bypass Road, but installing a bike hub for the rental of bikes to any individual, regardless of bike riding experience or ability.  Ironically, truck drivers using this road must possess a Transportation Worker Identification Credential (“TWIC”), a heightened homeland security measure, but a bike rider must simply possess credit card to rent a bike.  Notwithstanding this apparently contradictory fact, TAM has been consistent in its position that the best way to protect both bicyclists and truckers is to provide separated, significant infrastructure that prevents the intermingling of both users.  According to the National Highway Traffic Safety Administration (“NHTSA”), the key for ensuring healthy bike and truck safety involves “engineering, education and enforcement”. One cannot construct a road for a specific purpose and then expect to change the road’s purpose without significant, additional “engineering, education and enforcement”.  Even if MassDOT could afford both the financial and personnel resources to accomplish this, allowing individuals to bike this road or, worse, rent a bike to use on this dedicated roadway, is a recipe for tragedy.

On behalf of the numerous trucking companies that rely on the South Boston Bypass Road each day, I respectfully request that you do not approve of the introduction of “non-commercial” traffic on this important roadway.  If you have any questions or concerns, please do not hesitate to let me know.