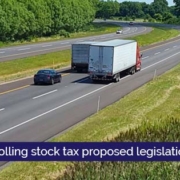 This legislation seeks to bring Massachusetts in line with a majority of other states within which an exemption from sales and use tax for rolling stock already exists. As drafted, the legislation amends Mass. Gen. Laws ch. 64H (i.e. sales tax) and Mass. Gen. Laws ch. 64I (i.e. use tax) to specifically exempt rolling stock from the sales and use tax. “Rolling stock” is defined as “vehicles such as trucks, tractors, and trailers that transport goods in interstate commerce.”

The legislation does not allow a motor carrier to avoid paying the multitude of fees otherwise required under federal, state and local law. Many other surrounding states (37) do not tax rolling stock; therefore, creating another incentive for interstate trucking companies to either leave Massachusetts or forego it in favor of other states. (i.e. potential companies in the future).

A recent study by Northeastern University’s Dukakis Center has shown that the elimination of the rolling stock tax will potentially produce an additional $15.9 million in additional taxes created by the growth of the for hire portion of the trucking industry. According to the same study, when factoring in private fleets as well, this benefit could double. This initiative will also incentivize trucking companies and companies with truck fleets to use newer, safer and more environmentally friendly trucks in the Commonwealth – whereas the current policy discourages this.

This legislation, which received a favorable report from the Joint Committee on Revenue last session, was included as part of the House Economic Development Bill during the same session.