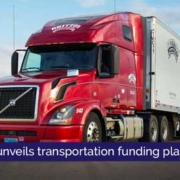 The Massachusetts House of Representatives unveiled its plan for funding the Commonwealth’s transportation financing needs last week. The measure, which contained a variety of funding mechanisms, was generally well-received by for its balanced approach.

In particular, the House funding plan will increase gasoline taxes from 26.54 cents a gallon to 31.54 cents a gallon. The state tax on diesel fuel will increase from 26.54 cents a gallon to 35.54 cents a gallon. In addition, the legislation creates a new, 9-tiered system for the corporate minimum tax. According to House leaders, an estimated 60% to 70% of corporations in the state pay the minimum corporate tax rate of $456 dollars a year, a rate that has not been raised since 1989. Under the proposal, small businesses in Massachusetts with less than $1 million in sales would continue to pay the minimum. The corporate tax would be capped at $150,000 for companies with annual Massachusetts sales of $1 billion or more. Additionally, the House plan proposes increased funding through an additional surcharge on transportation network companies and the removal of the sales tax exemption for rental car companies.

Finally, the House’s transportation finance legislation also includes TAM’s legislative priority: the exemption of rolling stock from the state’s sales and use tax. TAM thanks Speaker Bob DeLeo, House Majority Leader Ron Mariano, House Ways and Means Chairman Aaron Michlewitz and House Transportation Chair Bill Straus, as well as their respective staff, for their support for this initiative. As well, TAM extends a great appreciation to House Minority Leader Brad Jones and House Assistant Majority Leader Joe Wagner, as well as their respective staffs, for their continued work to advance this important matter.

The Massachusetts House of Representatives will be debating the transportation finance legislation on March 5th. The Massachusetts Senate will likely unveil their own proposal in the coming weeks. TAM will provide more information and analysis on this issue as it progresses through the legislative process.