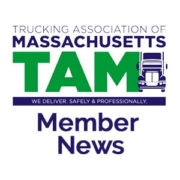 As the Massachusetts legislature continues to discuss meeting the Commonwealth’s transportation needs for the immediate and distant future, any decision must consider the impact on such actions on the trucking industry. According to a 2018 study by Northeastern University’ Dukakis Center for Urban and Regional Policy, “trucks are a large part of the commonwealth’s economy and also drive its growth. The overall trucking industry (including private and for-hire tucking) represent about one in 12 jobs or about 300,000 jobs in Massachusetts in 2017.” In addition, the trucking jobs in Massachusetts – whether diesel engine mechanic, machinist or driver – earn significantly more than the national average for such positions elsewhere. In short, the economic health of the trucking industry reflects the ability of the Commonwealth’s residents and businesses to succeed.