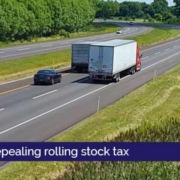 Rep. Bradley Jones Jr. (R) recently introduced H.B. 2959, An act relative to the taxation of rolling stock, in the Massachusetts House of Representatives. The issue has been a serious one for the trucking industry for about eight years.

“We’ve been fighting this for three or four sessions — almost eight years now — trying to make this occur. We’re hoping this will be the right time,” said Kevin Weeks, executive director of the Trucking Association of Massachusetts. “We have met with the governor a few times on this separately. He has assured us he would sign this if it makes it to his desk. We get support from everyone we’ve met with on the House and Senate side.”

The measure would provide an exemption from a “rolling stock” tax for trucks, tractors, and trailers owned by interstate trucking companies that are used to transport goods in interstate commerce.

“We are currently the only New England state, and one of just 13 nationwide, that provides no sales tax exemption for interstate for-hire trucking firms,” Jones told Transport Topics about the measure, officially House Bill 2959 in the Massachusetts Statehouse. “H.B. 2959 would codify in statute the commonwealth’s pre-1996 tax policies on rolling stock and would help make Massachusetts more competitive compared to our neighboring states.”