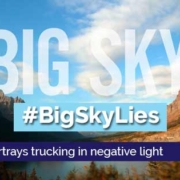 TAM and the American Trucking Association (ATA) is requesting you sign the petition to tell the ABC network truckers deserve free airtime to tell our story.

In addition to delivering the essential goods that Americans need in their everyday lives, professional truck drivers are the eyes and ears of our nation’s highways. Not only do they have zero resemblance to the portrayal in “Big Sky,” but they are leading the fight to eradicate human trafficking through organizations like Truckers Against Trafficking. Since 2007, more than 2,496 calls have been placed to the National Human Trafficking Hotline, reporting 663 cases of potential human trafficking involving 1,230 potential victims.

Truckers are not serial killers—they are highway heroes. We’re respectfully asking ABC give the trucking industry complimentary airtime to run advertisements that fairly represent truckers and educate viewers about what the industry is doing to combat human trafficking through Truckers Against Trafficking.

Please take a few moments out of your day to sign the petition at the ATA website.